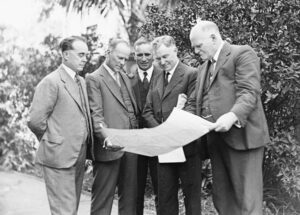 The Page Research Centre is named for Sir Earle Christmas Grafton Page, who served briefly as the 11th Prime Minister of Australia in April 1939, and who is the third longest serving federal parliamentarian in Australian history with 41 years, 361 days.

Earle Page was born in Grafton, New South Wales in August 1880, and was the fifth of eleven children of Charles and Mary Page. Gifted with a prodigious intellect and boundless energy, he was enrolled at the University of Sydney at just fifteen years old, topping his class in the final year of a medicine degree, before building a successful early career as a doctor, a businessman and a farmer. He married Ethel Blunt in 1906, and they had five children together. In 1916 he enlisted as a surgeon in the Army Medical Corps, and spent fifteen months working in military hospitals in Egypt, England and France.

On his return from the war he was elected mayor of South Grafton in 1918, and won the federal seat of Cowper in the 1919 federal election as an independent; a seat he held over fifteen consecutive federal elections. Along with ten other parliamentarians, Page formed the Country Party in 1920 to represent the constituency of regional and rural Australia, and emerged as their leader in 1921 – a position he held until 1939, when he was forced to step down after a famous dispute he had with Robert Menzies, the incoming UAP leader and Prime Minister, which saw The Country Party briefly excluded from Menzies’ first government. It is a testimony to his humility and pragmatism though that he was able to reconcile with Menzies after this, going on to serve as Minister for Commerce and Minister for Health in the post war Menzies government until 1956.

In a parliamentary career spanning nearly 42 years until his death in 1961, Sir Earle Page is rarely matched, serving as he did as Minister for Commerce, Minister for Health, Treasurer, de-facto Deputy Prime Minister (before the official creation of this post in 1968) and Prime Minister, as well as long serving leader of the Country Party, and in Menzies’ War Cabinet in 1941 and as the Australian representative to the UK war cabinet in 1941-1942.

He set the precedent for the Country Party, and the Nationals subsequently, to govern in coalition with the dominant conservative party, a coalition which endures since his day and has helped deliver some of the most famous and successful governments in Australian history. His legacy runs deep and wide, and we are proud and honoured to bear his name at the Page Research Centre.